Harald Hardrada (née Sigurdsson) was the greatest warrior of his age.

He was only fifteen when he fought and was badly wounded at the battle of  Stiklestad (1030).  During the following fifteen years he served first as a young mercenary in Russia before joining the Varangian guard, the crack regiment who guarded the Emperors of Byzantium.  He fought in Sicily and the Balkans and Asia Minor to preserve the porous Empire, escorted members of the royal family to Jerusalem, and won immense wealth, before returning in 1045 to Norway with his banner, Land-Waster, to contest and win the crown.  He was killed in battle at Stamford Bridge in 1066.

Harald was a man of ferocious energy, burning ambition, and a sense of destiny, with an imposing physical appearance (he had a blonde beard and floppy moustache, one eyebrow was higher than the other, and he was ‘a full hand’s height taller than other men’).  But for all his innate gifts, he had to learn how to be a leader, to understand how politics was largely a matter of attending to personal relationships, and to grasp matters of precedence and status.  His defects, moreover, were scarcely fewer than his skills.  He was cunning and cruel and vengeful.

Unsurprisingly, Harald was hugely attractive to women.  The elderly Empress Zoe unsuccessfully tried to take him to bed; he had a clandestine and passionate affair with her niece, Maria; and Harald’s Saga tells us how other well-born women risked life and limb to spring him out of prison…

The cycle consists of short poems in the persona of Harald during his formative years in Byzantium. Passionate and decided, fierce and terse and I hope sometimes witty, they’re not narratives but revelations, turning on Harald’s engagement with warfare, leadership, love and the contrasts between the appearance and values of the glittering hard-edged northern world, still half in thrall to the old Norse gods, and the softer, more seductive south.

Above all, they’re the words of a young man amongst men (most of them blue-eyed and tattooed) whose lives are in his hands, and on whom his own success and fame depend.

This thrilling new book from Walker Studio was published in November 2021.  The definitive retelling of the Arthurian legends by Kevin Crossley-Holland with glorious illustrations on every page by Chris Riddell.

Also available as an audiobook from 1st July 2022

How to tell the stories of King Arthur? What of the stories to tell? Most people will know the story of the sword in the stone, of how Arthur received the sword Excalibur and of his death – but what about the stories in between? There doesn’t seem to be an easy narrative path. Indeed, Arthur is not necessarily a main character for these are the stories about individual knights who made up the Company of the Round Table. They are stories full of tensions, magic, monsters, violence, love and loyalties. They are not children’s stories – though children will always thrill to the excitement of each quest without worrying about the more complicated emotions involved. Indeed, there are excellent retellings that are aimed at a younger audience. Kevin Crossley-Holland, however, takes the medieval originals in all their complicated splendour and retells them with his poet’s ear for language, capturing the character of that chivalric past while being contemporary and immediate. He also organises the stories to follow a consistent path, each quest reflecting the ideals of the Round Table; ideals that have to be proved through trials which may fail for the protagonists are fallible. In this way he is able to include the narrative of the Fisher King – a story that resonates powerfully today. The author makes sure we meet real people with real emotions, passions, hopes and fears. Perhaps, this is the reason the Arthurian cycle has such a powerful hold on the imagination; this is not a world peopled by gods.

The world conjured by Crossley-Holland is then brought to vivid, visual life by the illustrations from Chris Riddell, images which appear on every page, sometimes as marginalia  – pen portraits of the characters, sometimes as coloured borders surrounding the text, frequently vibrant single page or double page spreads. Contemporary in style, full of character capturing without apology both the violence and the tenderness they enhance and extend the narratives for a modern audience. The colour palette ranges from simple line drawings to spreads where a single colour dominates – gold, green, blue , red – picking up and emphasising the emotion or action of the event illustrated  and spreads where the palette is diverse to capture the atmosphere of the scene. The marriage between text and image is a dynamic one and the tales burst off the page.

These are not for the very young; these are (as they would have been in their original telling) for an older audience – adult even. They are stories that have stood the test of time and have inspired many others. It is not the adventures; it is the characters and above all it is Arthur, the flawed ideal, the Always King. Kevin Crossley-Holland and Chris Riddell bring them to life for today.

A collection of blood-bright Norse stories retold by Kevin Crossley-Holland.

Now also available as an audiobook. 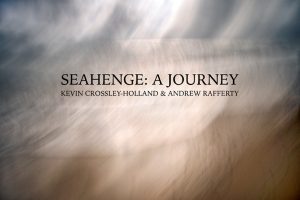 This spectacular new book was launched at the Sea Fever Festival on May 10th 2019.

In his new sequence of poems, Kevin Crossley-Holland approaches Seahenge along the Icknield Way and Peddar’s Way from his childhood home in the Chilterns, and his words are brilliantly complemented by Andrew Rafferty’s daring single-frame landscapes, seascapes and skyscapes, all of them taken at a moment in time.  Together they enter the world of Seahenge’s creators and weave then and now, past and present, into something greater and more lasting than either. This fantastic book, which was published by Walker Books in October 2018,  won The Mal Peet Children’s Award at the East Anglian Book Awards, 2019. NORSE MYTHS  –  TALES OF ODIN, THOR AND LOKI was published in November 2017 by Walker Studio in London and Candlewick in New York.  This book continues to be available in hardback, and has now reprinted three times.  A paperback version will be available in 2020.  The UK edition is being very strongly supported by Waterstone’s and Foyle’s.                        The U.S edition has already won a starred review from Book List ‘…….. Crossley-Holland’s inspired text is straightforward and largely unadorned in a way that makes it timesless…..   Together words and pictures work to memorable effect, doubtlessly inspiring their young readers to yell and cry.  The myths have never been better served.’ , while The Wall Street Journal has hailed it: “Brute power seems to emanate from the pages of ‘Norse Myths: Tales of Odin, Thor, and Loki’ (Candlewick Studio, 225 pages, $27.99), a collection of Viking stories retold with vigor and dash by Kevin Crossley-Holland. Wall Street Journal has since selected this book as one of 13 Children’s Books of the Year.   Jeffrey Alan Love’s stunning illustrations here are so potent and menacing that they seem less to have been created with acrylic and ink than to have been hammered from iron.”

As Neil Gaiman says, ‘Kevin Crossley-Holland is the master’

Check out the Traditional Tale page for more details.  And check out this blog if you’d like to know more about the Jeffrey Alan Love’s illustrations.

Also now available as an audiobook.

Writers in their Landscape, Kevin Crossley-Holland by Steve Gladwin